Fill your mug & grab your hook, it's time to find your next crochet goal

Earlier this week I gave my social media followers a sneak peak at the first block in my newest Corner-to-corner (C2C) afghan: Flocking to the Beach.  Our oldest toddler is turning four next week and after debating between unicorns or flamingos for months we finally landed on a fun flamingo and pineapple themed party in the park. 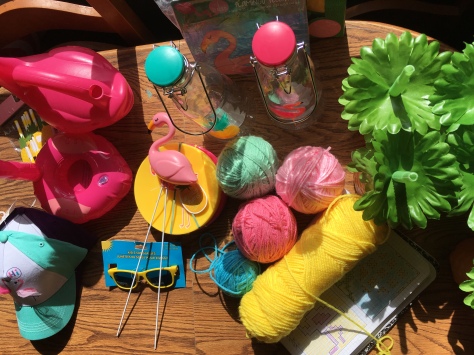 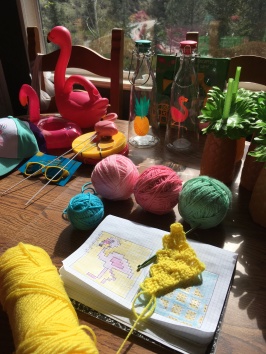 I didn’t realize how trendy my almost fournager was and as I was laying out all the goodies we had found I was loving the color combinations … that just happened to match perfectly to some of the colors in my stash.  Well, as you can easily imagine, I HAD to make her a new blanket for her birthday to match her summer vibe party.

Lately, I have been challenging myself with multiple color changes.  This block may be a bit of a challenge for a beginner, but the graph is only 20 x 20 pixels so it does work up quickly.  A fun tip I can share with you when using so many colors and multiple strands of each is to use clothes pins to hold your yarn in place.  You wont get it twisted and can easily drop your project to chase those crazy toddlers.

I have decided to make this a fun multi block afghan instead of the standard single image C2C blanket.  I will be releasing a new block every week, with pictures, graph and word chart.  I hope that you will work along with me and don’t forget to tag #CoffeeandCrochetGoals with your blocks and finished projects.  After all four blocks are complete I will sew them together and show you the fun surprise stitch I will be using for the border.  I hope you have as much fun as I did making this blanket.

This is a free pattern, but please do not share this pattern as your own.  You may make items to sell with this pattern, in exchange, please link back to this post.  Do not use my photos as your own sales photos.  Please feel free to tag CoffeeandCrochetGoals to share your completed projects.

FOR THE WORD CHART

Sit back and enjoy an evening of tying in loose ends, because there are a few.  When I finished my graph I decided I wanted to add a border to each block. With your hook attach the white yarn.

R3: Repeat round 2 around the entire square and tie off yarn.

Stay tuned and follow us on Instagram to get a sneak peak of next week’s block. Here is to smashing some CrochetGoals!

4 thoughts on “Flocking to the Beach —Pineapple Block—”

Finally getting to put a border on this little #rainbowblanket Check out @knotsewloopy for the C2C Bobble stitch I am obsessed with! It’s giving me all the #crochetgoals 🌈
Head over to @crochetzine to see my C2C World Map featured this month🤩 This little hobby of mine creating #freepatterns just got bigger! Thank you!!! #c2ccrochet #c2c #coffeeandcrochetgoals #coffeeandcrochet #crochet #crochetersoftheworld #worldmapblanket #worldmap #yarnaddict #yarn #redheartyarn #redheartyarns #crochetzine #crochetersofinstagram #crochetaddict #quarantine #quarantinelife #
I was recently asked by @crochetzine if they could share my World Map C2C. ♥️ So with all the extra time on my hands and renewed motivation I decided to pull out an old WIP in my stash for an XTRA LARGE World Map Blanket. 🗺 .
I spent the morning adding a puff border on my newest quarantine distraction and decided it needed to be frogged. Then I spent the afternoon adding an extra ruffly border only pull it all out again. How many frogs do you kiss before you go with a simple border? Pattern coming after I figure out this border🤔 #freepattern #coffeeandcrochet #coffeeandcrochetgoals #crochetersofinstagram #crochetaddict #crochetfrog #lovethecrochetersyoufollow #quarantinelife #quarantineandcreate #quarantineandcrochet #crochet #crochetblanket #crochetrainbow #grannystitch #grannystripe #ilovethisyarn
This African Flower 🌸 pattern is sweet and repetitive. A perfect distraction from the crazy surrounding us. .